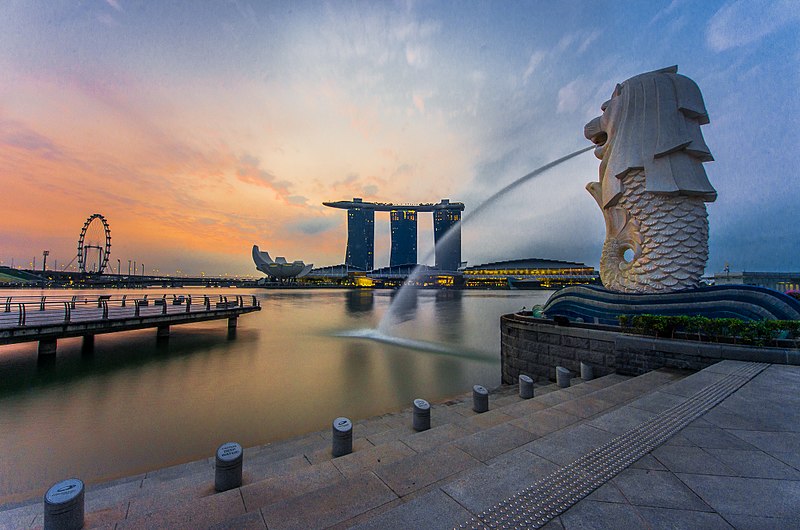 Singapore is an island city-state located in South East Asia. Well known city for its growing strong economy, and for its high-technological innovations, it is a global hub for non-stop action. With a rich art and culture is home to thousands of pieces of art and collections that can be found in the National Museum of Singapore, the National Gallery Singapore, and the Singapore Art Museum hosting many international exhibitions.

It is often described as a city in a garden with a rich ecosystem and incredible landscapes, Singapore hosts a Unesco world’s heritage site: the Singapore Botanic Garden.

It has a tropical rainforest climate and it is very humid with frequent rainfall.

The name “Singapore” is the anglicization of the Malay name for Singapura which derives from Sanskrit language Simhapura, literally the Lion City.

When the British arrived in 1819 they soon recognized the island as a natural choice for a new commercial port. In 1824 became a British possession after a treaty with its Sultan. The population raised from a few thousand natives in 1836 to more than 80 thousand people, many Chinese immigrants who came to work in plantations for the new British government. Today, Singapore is global leader in several economic sectors, and it has four official languages: English, Malay, Mandarin, and Tamil.

Once only the entrance of the Singapore River, now this area stands as an extraordinary example of how now this island-city is one of the most luxurious travel destinations.

Gardens by the bay are easy to reach. They give you elevated views and long promenades. Walking around the park is free.  Inside the Cloud Forest, the “Flower Dome” recreate the drier clime of Mediterranean places. In these areas, you can discover many birds and insects that have made this area their home.

Sentosa is a built island on the southern part of the city which was built with the only purpose of bringing leisure and relaxation. Beaches, shopping, theme parks, golf, dining and drinking are all available here and it can be reached by road or cable car.

Most of the nightlife is based on the beaches near tropical palm trees giving an exotic view.

It is dedicated to the conservation and to help improve the lives of the animals in captivity and in the wild. It leads you through a nocturnal journey to see wildlife after dark. You can find the Nepalese River Valley, Equatorial Africa, Indo Malayan Region, Burmese Hillside.

Search, booking, rate and review hostels at the best rates on our site.

The Hostelintheworld.com Network made the first page in 1998 to give presence online to the Hostels before in Europe now All over the World.

The Network list over 12000 Hostels and reach over 1.5M unique guests during the 2019. Welcome to the Best Hostels in the World.